At which stage of process you can start legally reside in Portugal (GV route)?

Is it pre-approval or you have to wait for residency cards?

The latter, after you get your cards.

Then the GV is much worse than the D7 if you want to start living in Portugal. Good to know.

If you intend to be boots on ground in portugal, not worth sinking the money into GV in the first place.

Are you sure? My lawyer says that it’s the date of pre-approval. The other thing is that you can’t get in and out of country anymore without having a valid Schengen visa, but residing is possible. I attach the part of the letter I had for me and my family for the entry for biometrics visit. 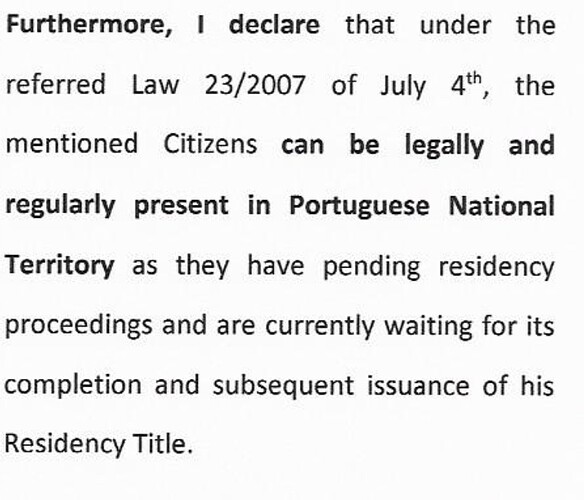 Its not clear though. Usually it applies when you already have residency title expiring/expired and a renewal is pending. This is the problem with Portugal. Nobody has conclusive answer including the lawyer. Or even a govt department that can give an answer.

As per my lawyer, upon ore approval but need a visa to enter.

This is the problem with Portugal. Nobody has conclusive answer including the lawyer. Or even a govt department that can give an answer.

No, I don’t think it will count.

Although the said Despacho allows for your "permanência em território nacional" since the SEF pre-approval, it does not provide you with the "o número, data e entidade que emitiu o seu título ou autorização de residência" which is the required evidence for the citizenship application, and which you will only get once your GV is issued.

Please note the justiça.gov.pt website does not seem to reflect the latest Lei de Nacionalidade changes and even send you to an outdated version of the Law citing 6 years term to citizenship.
As we know, the Law has been amended in 2018 to require only 5 years term before naturalization, here is the latest consolidated edition:
https://dre.pt/dre/legislacao-consolidada/lei/1981-34536975
Nevertheless, I reckon the same documentary evidence of "autorização de residência" still applies for the citizenship application.

with cases pending at the SEF, on March 18

with pending cases before the Immigration and Borders Service (Serviço de Estrangeiros e Fronteiras - SEF) up to the date of the declaration of the National State of Emergency, 18 March 2020. In those cases, their stay in national territory is deemed regular.

Excellent research, thanks! Just goes to show that a conclusive answer is never conclusive enough (and only the Sith deal in absolutes

Does anyone know if this has been extended? We applied in Nov 21 and got our passports stamped for entry then also and are not sure if we need to go back to the UK again for 3 months in Feb. We bought our house and have been living here for a couple of years?

We applied for our GV in Nov 2021, actually been living in Portugal for 2 years and have bought our house. We were told to exit Portugal for 3 months and return to UK due to Brexit, then return to Portugal with a Visa stamp which we did. Obviously it is taking months and months to process applications, but we can’t find out if we have to leave again in Feb for another 3 months. Solicitor doesn’t seem to know either! Does anyone else know the answer? I did read that applications prior to April 2021 you could stay but haven’t been able to find out if that is still the case. 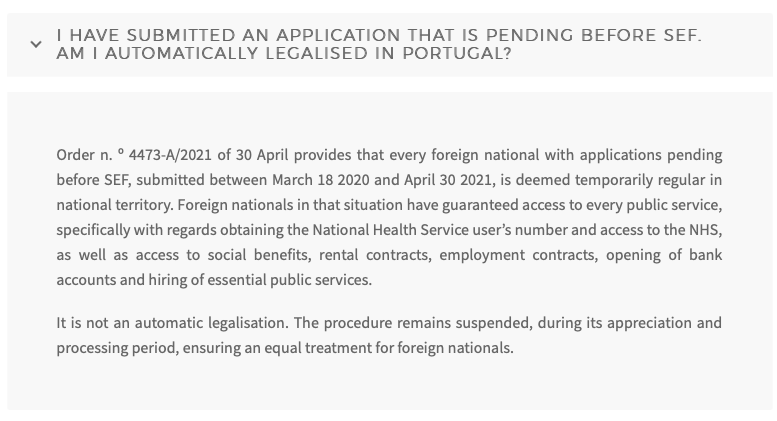 Sorry for being thick, but does that article mean Yes we have to keep leaving every 3 months and staying away for 3 months repeatedly until we have our application accepted?

It would seem that way, yes. There may be an argument that 110-A/2021 applies to you (e.g. auto-extend to end of March) but that’s sort of your call on the matter.

no need to follow the 90/180 days rules with pending resident permit card (can take more than 3 months) after biometrics? And can stay in PT this whole time waiting?

My lawyers’ advice: If you were in the national territory when you submitted the ARI application, you are legally allowed to stay in Portugal, and only Portugal, while you wait for the application process. Once you leave the territory, you will need observe the 90/180 days rule to re-enter. Unless your nationality has a bilateral agreement with another Schengen state.

Do you think this applies only once you have done Biometrics or from initial application being filed? Our initial SEF application was done Nov 2021 for 500K house purchase for Golden Visa?